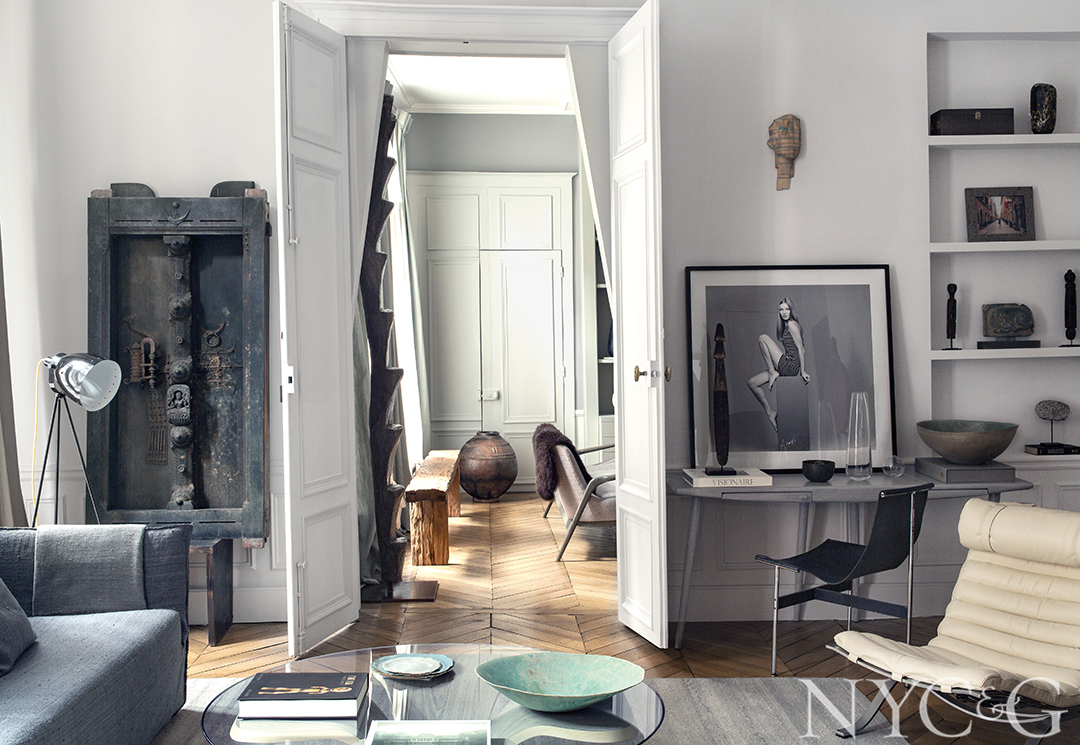 Mar Silver’s love affair with Paris began with, appropriately enough, a romance. The interior designer became reacquainted with an old friend while traveling in France eight years ago, and their connection blossomed into a relationship. “I discovered the city in a whole different light,” muses Silver, who recently acquired a luminous flat in the city’s bustling Sixth Arrondissement, a second home for the Westport, Connecticut–based decorator that is now a sanctuary for her and her partner. Not only has the new Left Bank home evolved into a repository for objects and artifacts gathered on her many travels around the world, but it also serves as a revolving display space for the couple’s burgeoning art collection.

During the first years of their relationship, Silver and her partner shared his petite Parisian pied-à-terre as she traveled between the U.S. and Europe, building her global design business. Silver’s primary residence and firm are still in Connecticut, but her practice is an international one—she currently has projects in France, Spain, and beyond—and includes interior design, her namesake furniture, textile, and rug collections, and art, which is fundamental to her interiors. “Art,” she notes, “is paramount in determining a home’s personality.”

As the couple’s life together in Paris evolved, they started looking for a larger home to share and were happy to discover that “it found us,” Silver recounts. “We walked into a space filled with wall-to-wall floor-to-ceiling bookshelves, which presented the perfect backdrop for displaying our collections.” Silver, whose principles of serenity, understatement, and soulfulness are deeply embodied in her work, was doubly appreciative that the flat was an unusually serene oasis in the middle of a bustling district popular with tourists and ex-pats. “It’s so quiet when you walk into the building’s courtyard,” she says. “That kind of calm and tranquility in such an energetic shell is quite dramatic.” 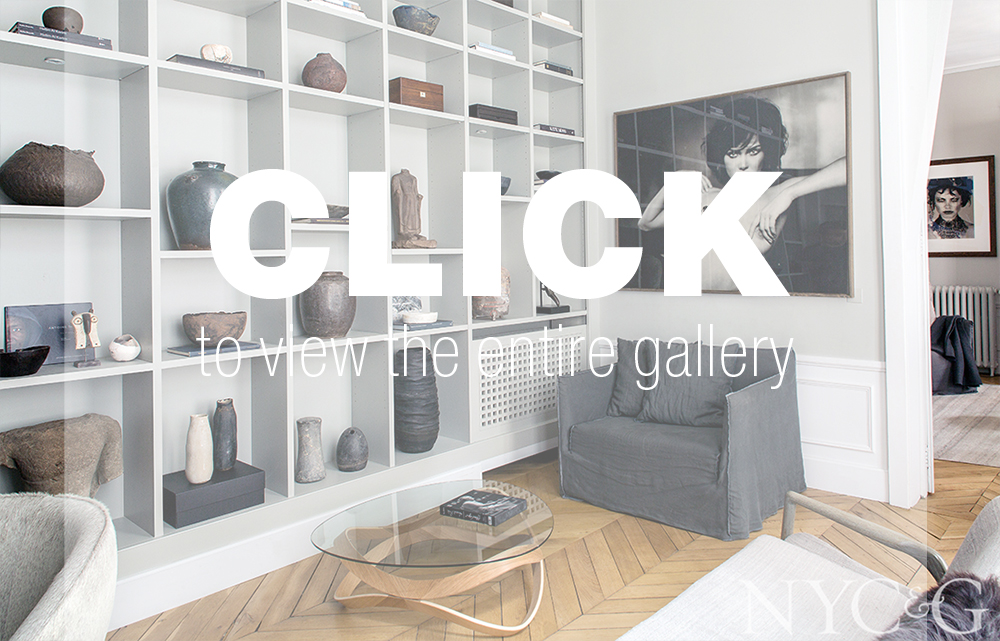 The 2,150-square-foot space was also in dreamy condition, with finishes book-matched to Silver’s pristine aesthetic. “I feel like the previous owners presented this to us,” says Silver, “and we’ve honored it, retaining the oyster grays on the walls and the beautiful honey-colored herringbone floors. I knew it was the right backdrop for layering my textiles and fabrics.”

In the tradition of French cosmopolitanism, which calls to mind the work of current Parisian designers like Frédéric Méchiche and Joseph Dirand, contemporary art and vintage furnishings play against the neutral canvas with unfailing flair. In the sitting room, a Marc LaGrange portrait, Black Orchid, looms above a vintage chair upholstered in Silver’s charcoal-hued Alma linen and a 1980s-style cocktail table of the decorator’s own design. In the living room, an Ari chair by mid-20th-century designer Arne Norell sits below a painting by contemporary artist Chris Duncan, both complemented by a sofa covered in a custom vegetable-dyed hand-tufted fabric, commissioned by Silver and made in Nepal on 17th-century looms. And in the dining room, vintage Italian chairs upholstered in a Silver textile surround a Hans Wegner dining table. Such stylish compositions, the designer notes, have come together organically, “until everything feels very harmonious.”

The apartment’s captivating art and objects, both antique and contemporary and sourced during the decorator’s travels to Southeast Asia, the South Pacific, Africa, and Europe, “have a patina to them, reflecting different experiences,” Silver says. “In Paris, there’s so much soul, and every piece in the space has a certain weight to it.” Indeed, energy seems to emanate from them—notably a dark wooden 19th-century ladder from the Republic of Congo that rises like a spine up the sitting room wall, in addition to the all-important bookshelves, filled with sculpture, ceramics, books, and two particularly special Bactrian stone vessels that “come with me everywhere.”

Now that she has embarked on this new Parisian chapter of her life, Silver says, it has “become a gateway to a more global community and opened up my world on different levels.” Days are filled with visits to “Gérard Mulot, where you can get croissants in the morning and bring back a gourmet dinner with an amazing bottle of Bordeaux, and La Palette, where we hang out, play cards, and drink espresso.” But nothing beats the time spent indulging in the quietude of her private retreat, where she has enjoyed “playing with the light, the subtle light and the absence of light when you look out the windows into the courtyard—that’s what 18th- and 19th-century Parisian apartments were all about. It has really been a spiritual journey.”

A version of this article appeared in the December/January 2017 issue of NYC&G (New York Cottages & Gardens) with the headline: Silver Streak.